Each giant tube of SMARTIES contains 120 grammes of white chocolate sweets in a crisp sugar shell. Each SMARTIES giant tube contains 6 portions [16 sweets] of your favourite SMARTIES treat that can be enjoyed or saved for later.

SMARTIES were originally named ‘Chocolate Dragée’ when we first started making them in Rowntree’s in York around 1882 – before being renamed Chocolate Beans, then finally SMARTIES in 1937. SMARTIES contain a creamy milk chocolate centre with a crispy sugar shell that has been at the heart of SMARTIES for nearly 80 years! 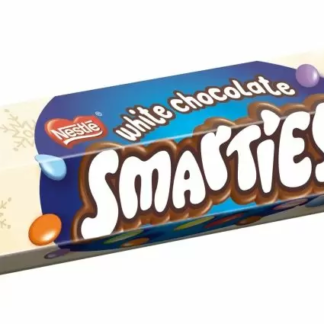